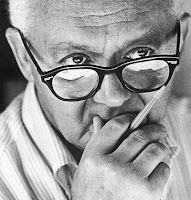 Paul Rand
The American graphic designer Paul Rand (real name: Peretz Rosenbaum) was born in New york in 1914. Between 1929 and 1934, Paul Rand studied in New York at the Pratt Institute, the Parsons School of Design, and the Art Students League. A pioneer of American graphic design, Paul Rand was influenced in his early work by Cubism and Constructivism as well as the Bauhaus, applying the principles learned from these avant-garde schools of art to graphic design. From 1936 to 1941, Paul Rand was art director of "Esquire" and "Apparel Arts" magazines while from 1938-1945 he also designed the acclaimed covers of "Direction" magaine. From 1941 until 1954 Paul Rand was art director of the William H. Weintraub advertizing agency in New York. From 1956 Paul Rand freelanced as a graphic designer and consultant for Westinghouse and IBM. Paul Rand was the designer who developed so many of the celebrated logos of such big companies and famous institutions as Westinghouse, NeXT Computer, IBM, United Parcel Service (UPS), the American Broadcasting Company (ABC), and Yale University.

In addition, Paul Rand found time to be a professor of graphic design at Yale University in New Haven, Connecticut. Paul Rand is the author of several important books on design, including "Thoughts on Design" (1947), "Design and the Play Instinct" (1955), "A Designer's Art" (1985), and "Design, Form and Chaos" (1993). 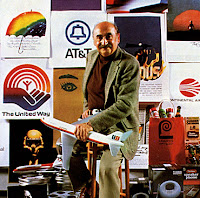 Saul Bass
Saul Bass (1920-1996) was not only one of the great graphic designers of the mid-20th century but the undisputed master of film title design thanks to his collaborations with Alfred Hitchcock, Otto Preminger and Martin Scorsese.

When the reels of film for Otto Preminger’s controversial new drugs movie, The Man with the Golden Arm, arrived at US movie theatres in 1955, a note was stuck on the cans - "Projectionists – pull curtain before the titles".

Until then, the lists of cast and crew members which passed for movie titles were so dull that projectionists only pulled back the curtains to reveal the screen once they’d finished. But Preminger wanted his audience to see The Man with the Golden Arm’s titles as an integral part of the film.

The movie’s theme was the struggle of its hero - a jazz musician played by Frank Sinatra - to overcome his heroin addiction. Designed by the graphic designer Saul Bass the titles featured an animated black paper-cut-out of a heroin addict’s arm. Knowing that the arm was a powerful image of addiction, Bass had chosen it – rather than Frank Sinatra’s famous face - as the symbol of both the movie’s titles and its promotional poster.

That cut-out arm caused a sensation and Saul Bass reinvented the movie title as an art form. By the end of his life, he had created over 50 title sequences for Preminger, Alfred Hitchcock, Stanley Kubrick, John Frankenheimer and Martin Scorsese. Although he later claimed that he found the Man with the Golden Arm sequence "a little disappointing now, because it was so imitated".

Even before he made his cinematic debut, Bass was a celebrated graphic designer. Born in the Bronx district of New York in 1920 to an emigré furrier and his wife, he was a creative child who drew constantly. Bass studied at the Art Students League in New York and Brooklyn College under Gyorgy Kepes, an Hungarian graphic designer who had worked with László Moholy-Nagy in 1930s Berlin and fled with him to the US. Kepes introduced Bass to Moholy’s Bauhaus style and to Russian Constructivism.

After apprenticeships with Manhattan design firms, Bass worked as a freelance graphic designer or "commercial artist" as they were called. Chafing at the creative constraints imposed on him in New York, he moved to Los Angeles in 1946. After freelancing, he opened his own studio in 1950 working mostly in advertising until Preminger invited him to design the poster for his 1954 movie, Carmen Jones. Impressed by the result, Preminger asked Bass to create the film’s title sequence too.

Now over-shadowed by Bass’ later work, Carmen Jones elicited commissions for titles for two 1955 movies: Robert Aldrich’s The Big Knife, and Billy Wilder’s The Seven Year Itch. But it was his next Preminger project, The Man with the Golden Arm, which established Bass as the doyen of film title design.

Over the next decade he honed his skill by creating an animated mini-movie for Mike Todd’s 1956 Around The World In 80 Days and a tearful eye for Preminger’s 1958 Bonjour Tristesse. Blessed with the gift of identifying the one image which symbolised the movie, Bass then recreated it in a strikingly modern style. Martin Scorsese once described his approach as creating: "an emblematic image, instantly recognisable and immediately tied to the film".

In 1958’s Vertigo, his first title sequence for Alfred Hitchcock, Bass shot an extreme close-up of a woman’s face and then her eye before spinning it into a sinister spiral as a bloody red soaks the screen. For his next Hitchcock commission, 1959’s North by Northwest, the credits swoop up and down a grid of vertical and diagonal lines like passengers stepping off elevators. It is only a few minutes after the movie has begun - with Cary Grant stepping out of an elevator - that we realise the grid is actually the façade of a skyscraper.

Equally haunting are the vertical bars sweeping across the screen in a manic, mirrored helter-skelter motif at the beginning of Hitchcock’s 1960 Psycho. This staccato sequence is an inspired symbol of Norman Bates’ fractured psyche. Hitchcock also allowed Bass to work on the film itself, notably on its dramatic highpoint, the famous shower scene with Janet Leigh.

Assisted by his second wife, Elaine, Bass created brilliant titles for other directors - from the animated alley cat in 1961’s Walk on the Wild Side, to the adrenalin-laced motor racing sequence in 1966’s Grand Prix. He then directed a series of shorts culminating in 1968’s Oscar-winning Why Man Creates and finally realised his ambition to direct a feature with 1974’s Phase IV.

To younger film directors, Saul Bass was a cinema legend with whom they longed to work. In 1987, he was persuaded to create the titles for James Brooks’ Broadcast News and then for Penny Marshall’s 1988 Big. In 1990, Bass found a new long term collaborator in Martin Scorsese who had grown up with – and idolised - his 1950s and 1960s titles. After 1990’s Goodfellas and 1991’s Cape Fear, Bass created a sequence of blossoming rose petals for Scorcese’s 1993’s The Age of Innocence and a hauntingly macabre one of Robert De Niro falling through the sinister neons of the Las Vegas Strip for the director’s 1995’s Casino to symbolise his character’s descent into hell.

Saul Bass died the next year. His New York Times obituary hailed him as "the minimalist auteur who put a jagged arm in motion in 1955 and created an entire film genre…and elevated it into an art."

Bradbury Thompson (1911-1995) was truly one of the giants of 20th-century graphic design, and was recognized for his achievements by every major American design organization: National Society of Art Directors of the Year Award (1950), AIGA Gold Medal Award (1975), Art Directors Hall of Fame (1977) In 1983, he received the Frederic W. Goudy Award from RIT.  A wonderful essay published by the Art Directors Club asks: "How did he become 'architect of prizewinning books, consulting physician to magazines,' pre-eminent typographer, designer of stamps, multiple medalist? It all started in Topeka..."

He was born in 1911 in Topeka, where he attended Washburn College, graduating in 1934. After a brief period as a designer at Capper Publications, where he thoroughly learned every aspect of printing production, Thompson moved to New York in 1938. Over the next sixty-some years he unfurled an astonishing talent and embraced every graphic design opportunity he could. He worked as art director at the Rogers-Kellogg-Stillson printing firm and then at Mademoiselle magazine, consulted and designed for Westvaco Corporation, designed a new alphabet, and began a teaching career at Yale University, where he stayed for many years.

His career was marked by many triumphs, but three stand out prominently as exemplars of his versatility. As the designer of more than 60 issues (1939-62) of Westvaco Inspirations, a promotional magazine published by the Westvaco Paper Corporation, he reached many thousands of typographers, print buyers, and students. He had an uncanny ability to merge and blend modernist typographic organization with classic typefaces and historic illustrations, all seasoned with affectionate sentiment and impeccable taste. Working with modest resources, he saw himself as teacher and guide.

Herb Lubalin
For almost 20 years, Herb Lubalin embodied what was best in American typography. Though a soft-spoken presence, Lubalin was in fact a master communicator with a deep grasp of the subtleties of human interaction. Lubalin received his education from the Cooper Union School in New York, where he was so successful that they named a department after him: the Herb Lubalin Study Center of Design and Typography. In 1945 he accepted a position as art director at Sudler and Hennessey, and in 1955 was promoted to vice president. In 1964, Lubalin left to establish his own company. He designed with the intent to communicate clearly and creatively. Rejecting the functionalist philosophy embraced by his European counterparts, he opted instead for a style that is more expressive, more communicative. Lubalin's portfolio includes advertising, packaging, editorial design, signage, typeface design, and postage stamps. Lubalin was an editorial designer for the 'Saturday Evening Post,' 'Fact,' 'Eros,' and 'Avant-Garde.' 'Avante-Garde' was dear to his heart because it represented the progressive ideals of the civil rights movement, the anti-war movement, and the youth culture of the time: ideals which Lubalin shared. The typeface, Avant-Garde, that Lubalin designed for the masthead of the magazine, went commercial in 1970 and has since become one of the most popular fonts in current use.

George Tscherny
George Tscherny’s work has ranged from the design of a commemorative stamp for the U.S. Postal Service to vast identification programs for such corporations as W. R. Grace & Company and Texas Gulf, Inc. His client list has included ibm, Johnson & Johnson, Mobil, and Air Canada.

Mr. Tscherny began his career in 1950 as a packaging designer with Donald Deskey & Associates. He then joined George Nelson & Associates, eventually becoming head of the graphics department. In 1955, he opened his own office, and shortly thereafter, was appointed consultant to the Ford Foundation, with design responsibility for all publications.

His work is represented in the permanent collections of the Museum of Modern Art, New York; the Cooper-Hewitt National Design Museum, New York; and Kunstgewerbemuseum, Zurich. In 1992, the Visual Arts Museum in New York honored him with a retrospective of his work.

An extensive selection of his work is deposited in the print archive and the electronic database of the Cooper Union School of Art. Over 1,000 posters and other examples of work are included in the agi archives of the Bibliotheque Nationale de France.

Most of these logos are still in use (may be with a slight 3D visual affect for the web) in some way, shape, or form. Generations from now will most likely see these logos if the companies are still in business.

So I know that Constructivism isn't talked about very much in this post, but it's the only blog entry that mentions it that I could find.

I recently watched "Repo! The Genetic Opera" (which I am now obsessed with lol) and thanks to this course, the thing I noticed the most was the design. The movie is set in the future and the plot is politically charged. The premise is that in 2056, there is an organ shortage leading a company called GeneCo to sell organs to those in need. The problem is that if your payments go into default, the repo-man comes and kills you to take the organs back.

This is a very useful post, thank you! I agree that innovations are the most important thing for most businesses, because with today’s fast changing world we need to stay on top of the changes, if we want to survive.
create beautiful custom flyers design
create beautiful custom flyers design
create amazing flyers for your next event
make the best business logo design
do stunning business handout design